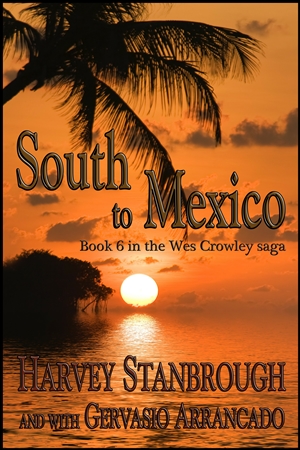 South to Mexico, which was co-written by Harvey Stanbrough and Gervasio Arrancado, was meant to be the final book of the Wes Crowley series. But with the advent of three prequels, it actually is Book 6 in the saga. Although the titles eventually are arranged chronologically, each also is a stand-alone novel.

South to Mexico opens with Wes crossing over into Mexico once again, for what probably will be the final time. This part of the saga contains a touch of the tall tale, a touch of magic realism, and the wide-open spaces of the sea and the desert.

Of course, those are more similar than they are not. Both are filled with angry gods who conspire to pit man against the elements and man against himself.

Wes makes new lifelong friends and retires a few more enemies on his way to Mexico and the rest of his life. Most importantly, he learns who he truly is and the value of love, magic, a family, and a good horse.