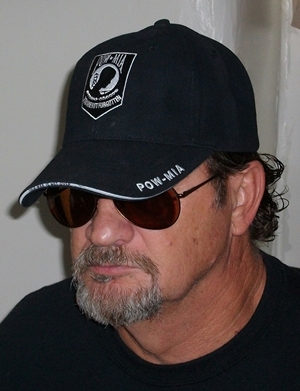 For a time, because he was unable to do otherwise, he split his writing personality among five personas and—strictly for purposes of being cagey—slipped in and out among several pseudonyms.

But he takes a pill for that now and writes only under his own name.

Harvey also enjoys the freedom of a technique called Writing Into the Dark, which he learned from professional writer Dean Wesley Smith. (See the blog roll.)

By the middle of June 2019, Harvey had written and published 44 novels, 8 novellas, over 190 short stories, and hundreds of poems. By early August 2021, he’d added 22 more novels and around 50 more short stories to his inventory. He has compiled and published 30 collections of short fiction and 5 critically acclaimed poetry collections. He also wrote several nonfiction books on the craft of writing. You can find those on this website.

Some of his poetry collections have been nominated for the Frankfurt (Germany) Book Fair Award, the Foreword Magazine Engraver’s Award, the Pushcart Prize, and the National Book Award. One of his books on writing (Writing Realistic Dialogue & Flash Fiction) finished in 5th place for the BEA (NY) Book of the Year Award (Education).

Some of Harvey’s short fiction still appears under the names of his various personas. They refused to let go. Hence, you can find those under his own name as well as those of Gervasio Arrancado, Eric Stringer, and Nicolas Z Porter.

Harvey misses and envies his former personas. He envies Gervasio Arrancado his rich cultural heritage and his wealth of acquaintances, Eric Stringer his frenetic frenzy, and Nick Porter his plethora of experiences. He still studies them and their works and writes whatever scraps they leave to him. And he is appreciative. After all, there are writers starving in China.

Oh, the ball cap. Harvey was never a POW, though he was a US Marine and supports those who were or are POWs. That’s the story on the ball cap.

Here is one of Harvey’s short stories. Enjoy. 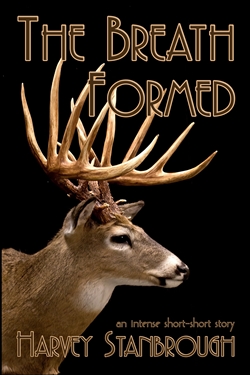 “[Hunting is a most] detested sport
that owes its pleasure to another’s pain.”
William Cowper

He was eating. Picking tender shoots of new grass from early November snow.

The air was crisp, clean, as if radiating off ice.

There was almost no breeze, and then there was no breeze.

The wind was cold up the canyon before, but now it was barely moving at all. Scented lightly with wild roses and strawberries, the smell of pine trees and melting snow.

The sun was warm on his back. The thin layer of snow still on the branches and on the ground was mostly transparent. Droplets of water dripped from the edges.

It was peaceful. Quiet.

There was only the sound of his left front hoof as he adjusted his stance. Only the sound of a droplet of water falling from a pine branch. It hushed into the shaded snow beneath it.

A big sound ripped through the solitude.

But it was a big sound and something hit him.

He swayed hard. His back hooves turned in the moist earth, the pine needles. He almost sat on his left hip. He caught himself and bolted downhill.

Before him, the breath formed, the steam that was his breath.

His eyes wide, he plunged into the breath.

It formed, and it was gone.

He ran through his own breath.

The breath formed. It led him. It was gone.

He ran through his breath.

What was the big sound? And why?

Calm. Calm. Run into the breath.

Make more breath, and run into the breath.

Running into the breath.

A big sound, hard. And something hit him.

Snow. If he could throw himself on the snow, he might douse the fire and—

No, the fire was trying to trick him.

If he stopped it would burn more, bigger, faster.

It would burn him up. Run harder. Harder.

A numbness was moving to his hips.

No, through his hips. They were numb.

His hips were numb.

Through his hips, it was moving into his back legs.

Trace it back. Run harder. Trace the numbness back.

It was coming from the fire. A trick of the fire.

Coming to make him stop.

What was the big noise and why?

What had hit him?

It hit so hard.

He reached farther with his front legs, digging, pulling, trying to speed up.

Run faster. Run harder. Leave the fire behind. Leave the numb behind.

Leave. Leave. He began to slow.

The breath formed. He moved into it. Through it. Slowed.

Maybe the loud sound was not for him.

Keep moving through it.

Maybe what hit him was an accident. Maybe nobody was trying to hurt him.

Maybe somebody would come to help him.

They were coming to help.

Purple flowers, poking through snow around the edges where the trees kept them safe.

He thought he would lie down gracefully, sideways to the trail. He would lie sideways, see them coming to help. He would guide them in.

They would kneel next to him. He would raise his head to thank them.

They would put out the fire. They would help him.

He picked a clearing, the next one.

The breath formed. He stumbled, but walked into the breath. Walked slowly through the breath.

His hips and back legs were numb, his front legs filled with fatigue. He wanted to turn sideways, to watch for them, guide them in and—

The breath formed and the muscles in his left leg tried to tense, tried to move him into it. He moved his nose into it. It was cool.

The breath formed and he watched as it dissipated.

The breath formed and he stared through it.

His back end let go and twisted him to the ground.

The fire was hot, growing.

A trick of the fire.

Striving for a breath.

The breath formed. It hung there. It dissipated.

That was okay. It was there.

Calm. He didn’t have to watch anymore.

It would dissipate. He didn’t have to watch.

He didn’t want to watch.

He closed his eyes.

Somebody would come to help him.

The breath formed. He felt it cool on his snout.

It was an accident, the big sound and what hit him.

He stretched his throat again.

The sound, something hitting him. It was all an accident.

He tried to adjust his left front hoof now, remembering.

A droplet of water fell from a pine branch.

It hit beside his right eye.