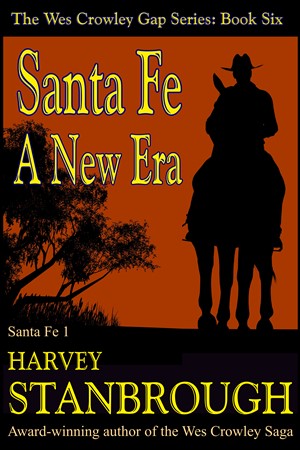 Between Books 2 and 3 of the 12-volume Wes Crowley saga, there’s a 15-year gap. This is the sixth book that sets out to fill that gap. Hence, the Wes Crowley Gap Series.

This is also the origin novel for the Wes Crowley Santa Fe sub-series. I don’t know how many stories will emerge from this diversion.

In this book, the Texas Rangers of Company D, Amarillo Texas, will meet an old friend of their captain, Major General (retired) Lew Wallace, the recently appointed governor of the New Mexico Territory.

The governor, it turns out, has a favor to ask of his old friend. But if Captain Wilson grants the favor, how will that affect the Amarillo company and the Rangers within it, including Wes and Mac? What difference will it make to the Rangers’ enemies, most notably the Comanche war chief Four Crows and the desperate comanchero, Francisco “Paco” Messina? And most importantly, what effect will it have on the Territory’s march toward eventual statehood?

If you’ve ever dreamed of riding wild on a good horse in a just cause, this is the series for you. Lay up your saddlebags with provisions for a few days, then saddle up and come along!
Search tags: western, Texas Rangers, comancheros, romance, Winchester, Colt .45, Amarillo

Available as an ebook at all ebook retailers. Click This Universal Link to go to the retailer of your choice.