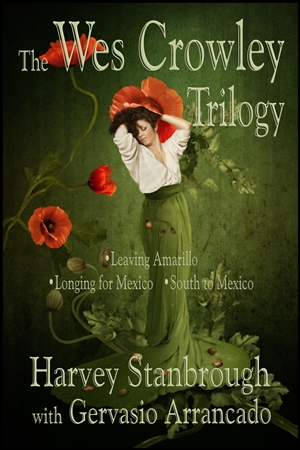 NOTE: This trilogy comprises ONLY the three original books of the story of Wes Crowley, Texas Ranger.

In the overall saga, those are now Books 4, 5, and 6. We decided to keep this title available for those who would prefer to see the original story before the addition of three prequels and three sequels.

However, as of December 11, 2015, the complete nine-book saga is available in The Wes Crowley Saga.

In Leaving Amarillo, Wes and his lifelong friend, Otis “Mac” McFadden, join the Texas Rangers in the 1870s in the Texas Panhandle. Honor and cowardice, greed and hatred, anger and love intertwine in this fast-paced tale of one man discovering what’s true in life. Wes battles Comanches, tracks enemies and friends, waxes philosophical, and finds himself in a place where one era hasn’t quite ended and the next hasn’t quite begun.

Longing for Mexico opens with what happens the night ex-Texas Ranger Otis “Mac” McFadden betrays his oath and his friendship with Wes. He creeps out of Amarillo rather than facing up to his friends and his responsibilities.

When the captain won’t allow Wes to go after Mac immediately, Wes continues to battle Comanches, and he falls deeply in love. For the first time in his life, he begins to plan around someone else. But there’s a massive Comanche raid on Amarillo, and everything goes wrong.

Well over a year after Mac abandoned his oath and his friendship, Wes finally decides to leave the Rangers to track down his lifelong friend turned traitor. He must get the answers he deserves.

Finally, in South to Mexico, Wes crosses into Mexico once again, for what probably will be the final time. This part of the saga contains a touch of the tall tale, a touch of magic realism, and the wide-open spaces of the sea and the desert. Of course, those are more similar than they are not. Both are filled with angry gods who conspire to pit man against the elements and man against himself.

Wes makes new lifelong friends and retires a few more enemies on his way to Mexico and the rest of his life. Most importantly, he learns who he truly is and the value of love, magic, a family, and a good horse.