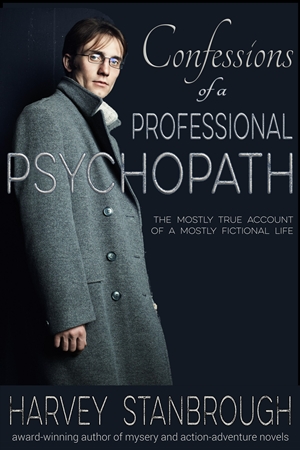 Charles Claymore Task, a man who has been labeled a psychopath by hypocrites who see themselves as “normal,” is asked by a group of wealthy investors to detail for a film crew what makes people like him tick. At least that was the initial plan.

“Of the three wingback chairs in my library, only one is upholstered in human skin. There’s a reason for that.”

Charlie can speak honestly only to what made him who he is, so he uses the opportunity to offer an autobiography of his first 32 years. From a few months after his birth through his early childhood, Charlie describes the abandonment, disillusionment, and betrayals that created him.

Subjected to unimagineable cruelties by his father, he paradoxically learned not to subject others to the same cruelties. Also paradoxically, that subjugation instilled within Charlie a deep, abiding sense of right and wrong and a hatred for anyone who would harm others, especially children.

It also irrevocably molded his personality into one that is ideally suited for a public service he calls Blight Removal and a profession as a freelance hit artist.

In addition to illustrating how he became who and what he is, Charlie provides examples of Blight Removal and his chosen profession. If you enjoy a fast-paced, heart-racing reading experience combined with an exploration of a skewed human mind, this is the book for you.