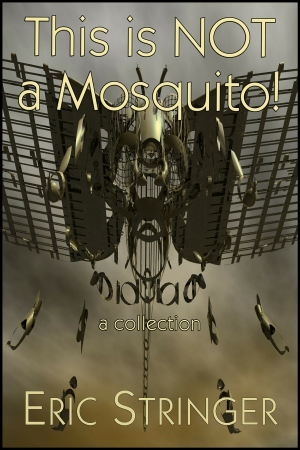 This is a collection of ten intense short stories.

In “Jumper,” a professional writer and conference speaker meets a wannabebutneverwill, and this one apparently is one over his limit. Maybe.

In “Theorem,” on a porch out in the deep woods a couple watch a storm roll in and debate what happens at the momen of death. Janie is a collector, but a collector of what?

In “Shattered,” a hard-luck woman gets mixed up with the mob but pays an unusual price.

In “This is Not a Mosquito!” a man — or something — is subjected to a miniature mosquito-like creature. He believes the creature is intent on sucking his blood. But the MM’s intentions are actually quite different. And in “Granny Mose,” an old woman reads signs, makes predictions, and maybe fulfills them deep in the swamps. They say gold can bring out the true character of a man, but how deep does that true character go?

In “The Maransky Nature Blot Test,” the character (or maybe the reader) endures a new kind of ink blot test.

In “The Curious Events Surrounding Thomas Pilsen,” a man more than absorbed by his fantasies, takes a cab to the airport. Along the way he becomes a mobster, and after he arrives he remembers an alien invasion, discovers a spaceport, and finds himself on the way to a mine on an alien planet.

In “Spider,” Dorothy is brought into the hospital, the victim of an accident. While in the hospital bed with her head in a fixed position, she sees a spider that takes her back to a childhood regret. The rest is just payback.

In “Running with the Wolves,” a post-apocalyptic tale, a character describes his life with the wolves. There are lessons here for humans, but not a lot of hope that they will listen.

And finally, in “Deadline,” a writer is late publishing his short story of the week, or is he? Follow along as the deadline nears.