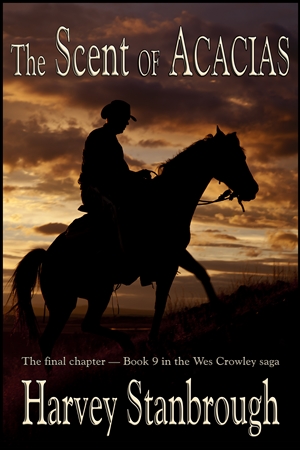 The Scent of Acacias is Book 9 and the final chapter in the Wes Crowley novel series. The titles are now arranged chronologically as one long saga, but each also is a stand-alone novel.

Wes has one last opportunity to “ride wild on a strong horse in a good cause.” Then he’s planning to retire. But will he lose everything that’s most important to him?

Once again Wes comes face to face with a pair of enemies from his long-ago past. It’s difficult to account for a hatred that would span so many years and over 1300 miles only to wreak vengeance on a man for an alleged slight. And Wes’ inability to account for that kind of hatred could well cost him everything he loves.

One of the enemies is a would-be Comanchero from the old days, Ross Freeman. He was and is a coward by any account, so much so that even the Comancheros didn’t want him around.

A second is Josey Talbot, a much younger man Wes once saved from a life of crime. But twisting the truth into a believable shape is easier to do immediately an impressionable young man has lost someone he loves. She is not only the love of his life and his wife of ten years, but his last living relative.

A third new enemy comes into play in the persona of Aramis Dotrive, a gambler and professional killer from Georgia who had a brief run-in with the young Ranger Crowley near the beginning of the latter’s career.

These and others will conspire to hunt down Captain Crowley, the leader of the Guerrero Rangers, and harm him in ways from which he might never recover.